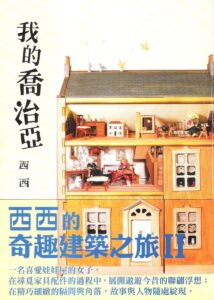 My Georgian, a novel, was published by Hung Fan Books.

About Xi Xi’s My Georgian

Around the year 2000, Xi Xi became fascinated by dollhouses. In My Georgian, published in 2008, Ellen, the narrator modelled on Xi Xi, was also passionately immersed in building her dollhouse. The novel includes a lot of dollhouse-related knowledge, including Ellen’s experience of touring around Europe seeing dollhouses and miniature house models, and her conversations with friends and dolls about dollhouses. Beginning with dollhouses, a gendered “toy”, Xi Xi explores the relationships between art and games and between reality and fiction. But this is only one way to begin understanding the novel.

Of course, it was not a coincidence that Xi Xi chose a dollhouse of this particular style. At the beginning of the novel, Ellen, who was holding the dollhouse, fell down the stairs. This echoes Margaret Thatcher tumbling down the steps outside the Great Hall of the People in China in 1982. The dollhouse relates to memories from the colonial era at every turn. The novel even points out directly why Ellen decided to build a dollhouse: “I am rebuilding my memories.”

By rebuilding memories in the form of miniature toys, the novel diverges from monumental historical imagination and opens a distinctive path for memory construction. The petiteness of dollhouses and the triviality of games contrast directly with the grandeur and importance of historical architecture. Monuments depict history through static solidity, whereas dollhouses, as described by Ellen, “are fluid, incomplete, fixed at one moment but ready for change the next.”

Xi Xi’s thoughts on My Georgian

-I simply like what I like for no specific reason. My parents brought me here from mainland China when I was a small child. I studied and grew up here. Then your government left, and ours pressed for new measures as if it is to compete with the UK or the US. Meanwhile, there was a large-scale demolition as if to purge our memories. Some people even warned against any ulterior motives for keeping traces of colonization. About that time, I came across a Georgian house, and it was love at first sight. But my fondness of it does not mean I wish to live in one; that is also true for my fondness of a traditional courtyard house—I like it, but does that mean I wish to live in one?  I manage my own dollhouse, and for better or for worse, I am rebuilding my memory.

Critics’ views on My Georgian

This is an overlooked and frequently misunderstood book…

In My Georgian, there are two different types of characters, and two different types of dialogues, distinguished by different symbols—it is important to note the differences. In terms of characters, the protagonist is the narrator who manages the Georgian dollhouse; her name is Ellen, which happens to be Xi Xi’s English name. There is also an interlocutor who only has a voice, as well as the narrator’s family members, who have a tea party at the end of the book to discuss their ideal home.

Strictly speaking, there is only one real character in the novel—the narrator—and all actions are undertaken by her. The dolls are fictional creations. They do not undertake any actions, but respond to and express their opinions on her actions. The author only represents them through dialogue, as the objective is rooted in the concept, not the characterization. They live in the dialogues, which reveal their various attitudes.

If you’ve read My Georgian, leave us a message below!